Times have changed for an expanding Fenland foodbank after transforming a former football changing room into its new, larger home. 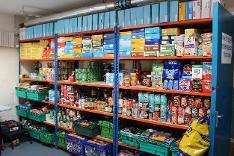 Whittlesey Emergency Food Aid hopes to be able to help even more people in need after moving from its old base at Whittlesey Christian Church in Broad Street to its new premises at the town's Manor Leisure Centre, in Station Road.

And thanks to help from Fenland District Council, Freedom Leisure, Lincolnshire Coop, and a band of stalwart volunteers for bringing it all together, the foodbank officially relaunched on Tuesday 1 November.

A special cake cutting was held to mark the occasion, and guests were welcomed by Whittlesey Mayor, Cllr David Mason, who is also Leader of Whittlesey Town Council, Fenland District Councillor for Whittlesey and Founder and Chairman of Whittlesey Emergency Food Aid.

"We had started to overtake the church somewhat, so we needed to find a bigger home," he said. "After looking at different options, Fenland District Council came to our aid and found the perfect spot, an old changing room at The Manor.

"After lots of hard work to transform the space, taking out benches, painting and transporting fridges and freezers, we now have an ideal space to provide the service from and will hopefully be able to help even more people."

The foodbank was set up in 2014 after Cllr Mason set about finding a local solution to help people in need for food and household items in Whittlesey. He said he wanted to offer a service that could help people as and when they needed help, without the need for a referral or foodbank voucher.

He set up a public meeting to gauge support, and Pastor Brian Smithyman stepped forward to offer the Christian Church as a base. The foodbank started off with just a cupboard of food in the church but has grown so much over the years that it was time to find a new home.

Cllr Mason thanked everyone who has supported the foodbank over the years, particularly secretary Cllr Julie Windle and volunteers Sue and Joe Jennings who often volunteer seven days a week helping to run the service and collecting food from supermarkets.

The Chairman of Fenland District Council, Cllr Alex Miscandlon, said: "I'm delighted the Council was able to help Whittlesey Emergency Food Aid find a new home. Who would have thought an old changing room could be repurposed in this way? But it is a really great idea and an ideal location. I know it will help the service - which is extremely valued in the Whittlesey community - go from strength to strength."